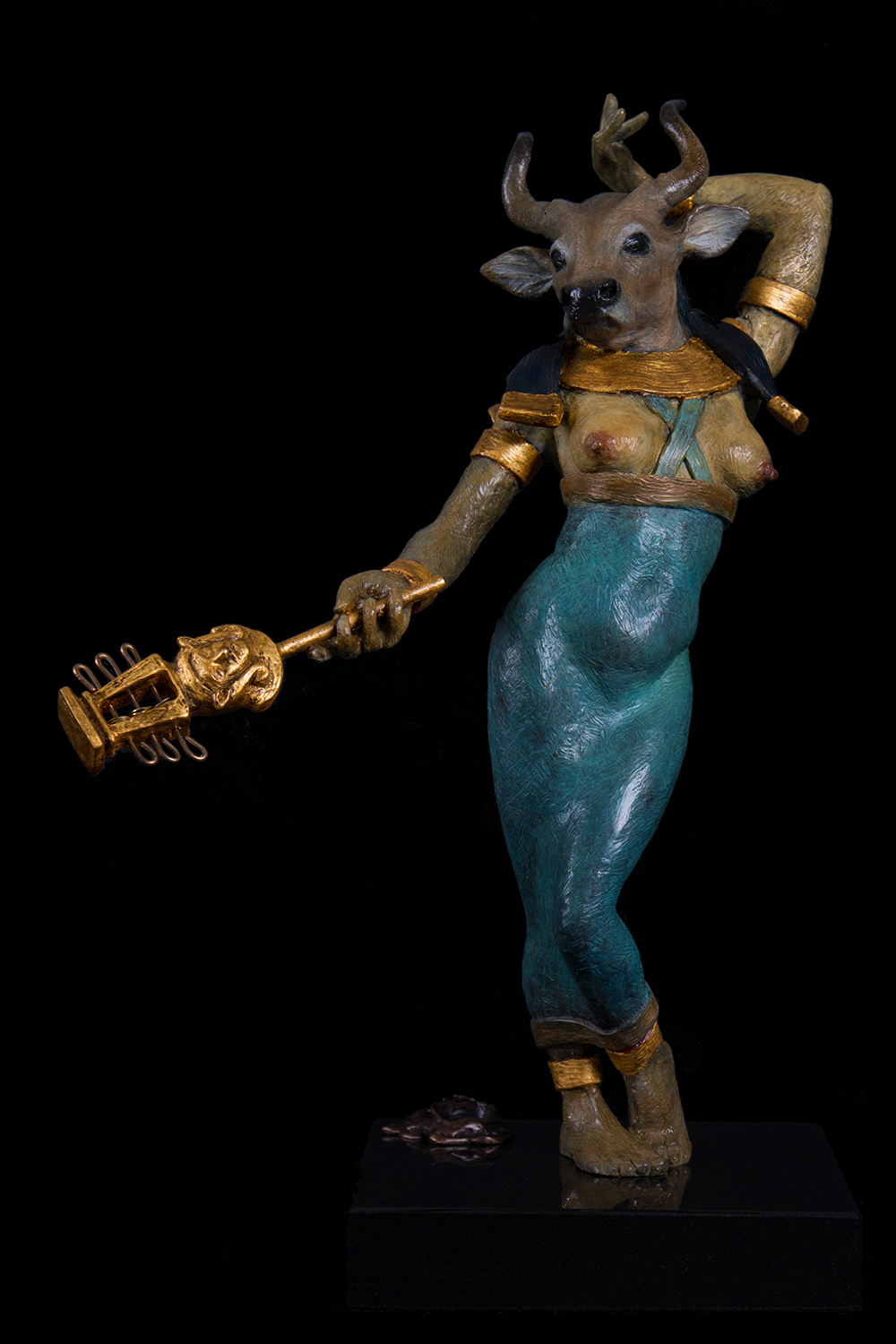 Called “The Great of Many Names”, her titles & attributes are so numerous it is clear she touched all aspects of life & death. She was revered as ruler of sky, moisture, agriculture, fertility, love & sexual delight, motherhood & childbirth, joy, music, dance, drunkenness, and, above all, gratitude.

This complex neter could function as the mother, consort, and/or daughter of the creator god, and was a solar deity in her own right – the vengeful Eye of Ra [

], fiery daughter of the sun. In contrast, she was also recognized as “the lover of life” who imbued the world with joy, and was considered the embodiment of bliss. It was believed that she, more than all other gods, brought the best gifts of the neteru to the children of earth.

Her titles Mistress of Jubilation, Queen of the Dance, Mistress of Music, and Mistress of Inebriety Without End, give a strong impression of the joyous, playful, and generally celebratory nature of her rites. The dancing, eating and drinking that took place during her festivals represented the opposite of the sorrow, hunger, and thirst that the Egyptians associated with death. Whereas the rampages of the Eye of Ra brought death to humans, these festivals celebrated life, abundance, and joy.

Also known as the Beautiful One, Hathor was inextricably linked with health, beauty, perfume, and the cosmetic arts, but was not considered to be vain or superficial, simply confident in her beauty and goodness. Her nature was carnal as well: she was hailed as Mistress of the Vulva, and associated with love, romance, sexual delight, and all aspects of female sexuality.

As the Mother of Mothers she personified the creative power of nature, and was believed to assist women with all aspects of fertility, conception, labor and childbirth. The Goddesses’ milk was equated with waters of the Nile inundation – the cyclical source of all abundance & bounty – and was a symbol of divinity and royal status, giving the pharaoh, whom she nursed, the grace of office and the supernatural powers to protect Egypt.

In her role of Goddess of the West she softened the fear of death and gave hope of rebirth. Hathor welcomed the setting sun into her outstretched arms, just as she welcomed the dead into the next life – for both gods and mortals, she eased the transition from death to new life. A friend to the dead, she helped guide the souls of the deceased toward immortality, and was said to hand out good things to the Blessed Dead in the afterlife. This beneficent afterlife aspect further cemented her role as goddess of gratitude and a thankful heart.

] (a sacred rattle used in her religious ceremonies), hints at her promises of bliss and sexual pleasure.